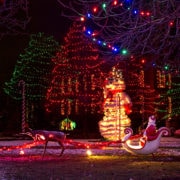 A Santa in his sleigh, reindeer, and a giant snowman, and a nativity scene are part of a festive outdoor Christmas display on a village square

This is the time of the year when we want our homes to look festive. It’s also the time of year where not setting things up properly can cause problems. Here are some tips for doing things right when it comes to your Holiday outdoor lighting.

While it’s tempting to just pull out the bucket of lights and start putting them up, stop for a minute or two. Check all the lights, make sure they are working, and if you can, make a plan. The take some measurement and make certain you have enough lights to cover the area.

There’s nothing worse than being up on a ladder and running out of lights when you are almost done.  It’s also a good idea to have someone watching, just in case there is a problem. If you don’t have the right ladders, don’t reach, find someone who has a taller ladder and don’t take the chance of falling.